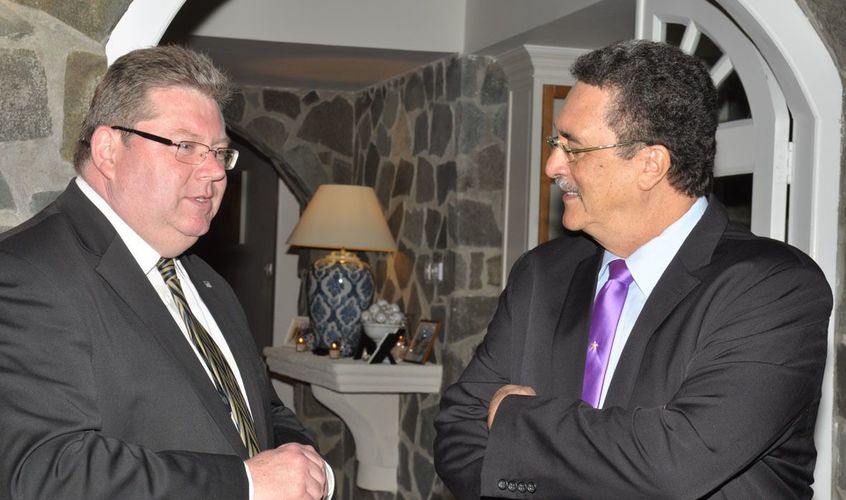 The CEO of the BCCC, Dr Ian Kelly and Deputy CEO Pauline Wade were in St Lucia for the glittering launch.

Among the guests were Her Excellency the Governor General of St Lucia, Dame Pearlette Louisy, Prime Minister Dr The Honourable Kenny Anthony and other dignitaries and St Lucian business leaders.

The new Chapter of the BCCC will be run by Country Manager Randy Cato, who will work in a similar role to Tracey Hoford, the Country Manager for the Trinidad Chapter, which was established in 2001.

Pauline Wade said: “We started taking trade missions to the Caribbean in 1998. This second Chapter is in response to a request from the Foreign and Commonwealth Office and because of interest among businesses in the Caribbean”.

The St Lucia Chamber will support bilateral trade between the UK and St Lucia with businesses at both ends of the trans-Atlantic chain expected to benefit from its expertise, building on the success and experience of the Trinidad and Tobago Chapter.

Pauline Wade added: “This is a very significant development for business in the Caribbean, but it is also important for British businesses, and we have success stories from our own part of the world to underline that”. GF Foods (York) Ltd is one such business, and director Sally Allister, says it was a trade mission to Trinidad with the BCCC in January 2014 which helped her business take its Feel Free brand of gluten-free products to the international market.

Sally said: “We went to Trinidad and Tobago and to Barbados and it was really good for our business. The Chamber set up meetings with the relevant businesses and we exported to Trinidad with a partner who also covers Barbados. Customers in the Caribbean are very loyal to British brands and there are a lot of good opportunities”.

Another company to visit Trinidad and Barbados on that same Trade Mission was Ramsden International, based in Grimsby, which won an international business award from the British Chambers of Commerce in 2014 in recognition of the company’s efforts in building an export network of more than 120 countries.