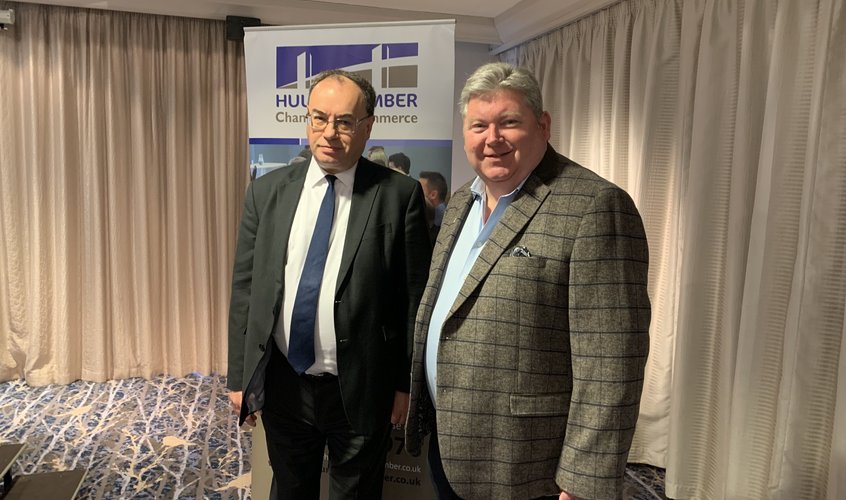 Dr Ian Kelly with The Governor of the Bank of England.

The post pandemic Caribbean economy and fall out from the Russian Ukrainian war on the likes of oligarchs yachts in Antigua as defended by Sir Ron Sanders, were amongst the issues discussed along with the Humber’s importance to offshore wind renewables and energy security in the UK.

Dr Kelly said “ the Governor gave some important insights on how the post pandemic world and the war in the Ukraine is changing global supply chain patterns especially affecting energy security but also impacting on the accelerating need to tackle climate change were we in the Humber are becoming a global leader in renewable energy”.

He went on to say, “Mervyn King, who came to see us a few years ago, is hugely respected in this part of the world for giving the most honest assessments in the British establishment on the impact and consequences of Brexit on Britain and the European Community. Andrew Bailey serves in those best traditions of the Bank and it was a pleasure to listen to his thoughts on this visit.

Dr Kelly also quipped that the current Governor, when he held a more junior position in the Bank during the global financial crisis, also played a key role in unlocking the finances around Iceland’s fish coming to Grimsby in the Humber. Thus keeping the nation supplied wish it’s national dish of fish and chips. Let’s hope he is as successful with the global energy crisis !”